Despite the fact that AMD has been able to enjoy a success story on the processor front with the architecture Zen and the Ryzen series, the company has not had as good luck in terms of graphics cards. Despite innovations such as manufacturing technology of 7 nanometers and the semi-new architecture Radeon DNA (RDNA), the graphics cards in the Radeon RX 5000 series have not really been able to raw on Nvidia’s Geforce RTX series.

A prevailing feeling has therefore been that AMD would also find it difficult to measure up to Nvidia’s graphics card in the Geforce RTX 3000 “Ampere” series, but the rumors of recent months have painted promising performance ambitions for AMD. When the company now presents the Radeon RX 6000 series, it is very real graphics card with high ambitions, where the “Big Navi” cards seem to be able to offer Nvidia tough competition.

The new lineup of graphics cards consists of the Radeon RX 6900 XT as the flagship. Below this comes the RX 6800 XT, which like Nvidia’s Geforce RTX 3080 is the performance card for everyone except the most extreme gaming fan. Below this ends up the slightly more affordable card RX 6800.

As previously reported, the Radeon RX 6900 XT “Big Navi” is equipped with as many as 80 computing units (CU) and a clock frequency (Game Clock) of 2,015 MHz. The boost frequency rises to 2,250 MHz and the graphics circuit can work against a full 16 GB of GDDR6. The card’s total board power (TBP) is 300 watts.

With the Radeon RX 6800 XT, the circuit jumps down to 72 CU units, with the same clock frequencies of 2,015 MHz Game Clock and 2,250 MHz boost frequency. Here, too, the graphics memory measures in at 16 GB GDDR6, and power consumption of 300 watts. The little sibling is content with 60 CU units, a playing frequency of 1,815 MHz and a boost frequency of 2,105 MHz. Surprisingly, this card also gets 16 GB GDDR6 but power consumption of 250 watts.

AMD built RDNA for better adaptation to gaming, and RDNA 2 builds on that. As promised, according to AMD, RDNA 2 will deliver 54 percent better performance per watt compared to its predecessor. The calculation units (CU) have also become 30 percent more energy efficient compared to RDNA 1.0.

A new feature is Infinity Cache, which, like preliminary reports, has been rumored to ensure that AMD can make better use of a relatively narrow memory bus. The Radeon RX 6000 cards use a 256-bit wide memory bus, but through the Infinity Cache, AMD squeezes out 2.17 × more of the available bandwidth, for lower energy consumption. The technology also reduces latency, and should offer better bandwidth than a 384-bit memory bus. Infinity Cache is based on a local cache space on the graphics card, where all cards in the series are equipped with 128 MB Infinity Cache.

RDNA 2 supports Microsoft Directstorage, the upcoming storage interface that provides faster performance when the graphics card is accompanied by fast NVME-connected SSD storage. Once Directstorage is implemented in games, it looks like it could be the next big transforming step for the gaming experience. Unfortunately, the technology is far off the horizon with a developer version planned sometime in 2021, but once it is utilized, AMD’s hardware will be ready to use it.

With the Smart Access Memory technology, the processor gets faster access to the graphics card’s memory, which when combined with the overclocking mode Rage Mode gives a total of between 4 and 13 percent better performance. This should give the player the advantage of combining AMD’s processors with the company’s graphics card.

In terms of performance comparisons, AMD compares the top card RX 6900 XT against Nvidia’s monster card Geforce RTX 3090, where RX 6900 XT according to AMD’s information keeps pace and even surpasses the competitor in certain gaming scenarios. This is achieved with a lower power budget of 300 watts versus 350 watts with the RTX 3090, and also less memory of 16 GB GDDR6 versus 24 GB faster GDDR6X in the RTX 3090. It is worth noting that AMD has used new technologies such as Smart Access Memory and the Rage Mode function. , which automatically overclockes the graphics card, in this case.

With the Radeon RX 6800 XT against Nvidia’s top card RTX 3080, where AMD’s cards manage to keep pace in both 4K UHD and 1440p, and this with lower energy consumption. Examples of where the RX 6800 XT performs better than the RTX 3080 are Battlefield V, Wolfenstein Youngblood and Doom Eternal in 1440p resolution. These are titles that typically perform well on AMD hardware, and seem to benefit from the further developments in RDNA 2.

With the RX 6800, AMD instead compares with Nvidia’s former flagship Geforce RTX 2080 Ti. Here, AMD again delivers better performance in the games Doom Eternal and Battlefield V in the resolution 4K UHD, but here the red team also manages to get an advantage in the title Forza Horizon 4. The Ryzen-combined Smart Access Memory supports this card, also in 1440p resolution – a resolution where the company consistently breaks the comparison card.

The first version of RDNA was a step forward against the aging GCN architecture, but it was not a completely new architecture either. Full capabilities are only now being introduced with RDNA 2, which supports performance-enhancing technologies such as VRS and more advanced 3D environments with mesh shaders.

It also means the long-awaited premiere for hardware accelerated ray tracing, which until now has been reserved for Nvidia’s RTX series. For ray tracing AMD uses the Fidelity FX technology to clean up rendered ray tracingcontent, as this generates visual “noise” that must be handled before the image finally reaches the user’s screen. 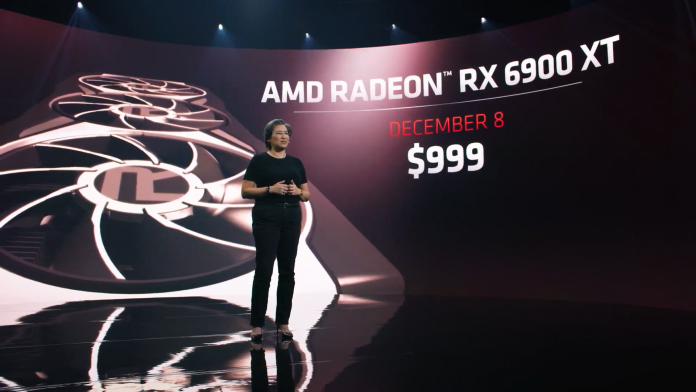 What do you think of the Radeon RX 6000 series and the features of RDNA 2? What did you hope for, more than you hoped for or even a disappointment? Share in the comments!