G.Skill announced that his latest Trident Z Royal rams were the basis of the new world record for ram memory frequencies, reaching 6666MHz along with an Asus ROG Maximus XII Apex and an Intel Core i9-10900K. The module used was the F4-4000C18-8GTRG, part of the 2x8GB 4000MHz C18 kit from G.Skill's Trident Z Royal line.

Behind the record is the Asus development team, who obtained this and several other records testing their latest Apex. The particular user who broke the record was bionbao, whose HWBOT validation can be found here. 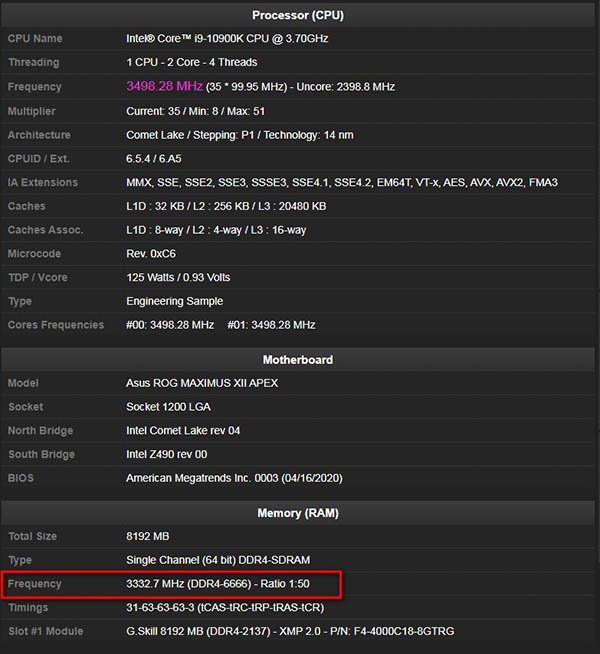 Speaking of the record itself, 6665.4MHz was specifically reached, which CPU-Z reports as DDR4-6666, obviously using liquid nitrogen on the processor to cool its memory controller and on the memories to allow the frequencies to be raised to the maximum possible. When looking for the maximum frequency, the latencies should be as high as possible so that they do not become a restriction, and that is why 31-63-63-63-3 latencies were used, which are the maximum allowed by the motherboard.

If you are interested in seeing how the record was broken, we leave you this video that shows the live process:

What do you think about this overclocking record with G.Skill memories? Do you think you can get over it soon?

New chipsets for AMD Ryzen CPUs: A520 coming in the fall

Fri May 22 , 2020
Spread the love        Tweet      It will be during the month of September 2020 that we will see the first motherboards based on AMD A520 chipsetentry level solutions for use with i AMD processors of the Ryzen family. It is Digitimes to advance this information, not officially confirmed by AMD, highlighting how […]