It’s not a pity to spend time looking for this card, because it is extremely advantageous in terms of performance and price ratio. Which RX 480 is the best for mining, you can find out based on the characteristics and indicators that it is capable of producing.

Contents hide
1 Graphics card specifications
1.1 What are the indicators of a video card in mining
1.2 Which model to choose, the main nuances when buying a used one
2 What to mine on AMD RX 480, the choice of the algorithm
3 BIOS firmware
4 Overclocking in working order
5 How to reduce energy consumption

What is better to mine on RX 480 8 gb, how to flash a video card for mining and how to overclock an rx 480 in mining will be described in more detail below.

The video card may differ in the amount of RAM on board. The first version with 4 GB, while the second with 8 GB is slightly more expensive. The characteristics of the video card are as follows:

What are the indicators of a video card in mining

The best option when choosing an algorithm for mining on the Radeon RX 480 is considered to be Ethash… There are other algorithms that can generate good returns. For example, the new RVN coin protocol, CawPow as well as ProgPowZ, but Ethash remains the most profitable algorithm for these cards.

Earlier, ether can be mined not only in solo, but also during dual mining, which will not actually affect its production. Dual-mining with Ethereum was excellently mined by Decred and XVG. But, in 2020, double mining lost profitability. The only profitable way to mine two crypto coins at once is to launch Merged mining of altcoins Zill+ETH… The features of the Zilliqa blockchain project allow combining the mining of coins. Most of the time, your rig will be mining Ethereum, cycling to Zill.

If you configure and overclock the video card correctly, then you can achieve fairly good indicators of the value of the mining speed in 30 Mh / s on a graphics card with 8 GB, and 28 Mh / s on the version with 4 GB. But keep in mind, 4-gig cards will soon no longer be able to mine ETH / ETC.

The standard settings of the video card allow overclocking the frequency of the video processor up to 1100 MHz, but this is not the maximum of the card in mining. If you use the program MSI Afterburner or Wattol, then you can increase this value even more, but we do not recommend it, since this is the maximum optimal frequency. More attention is paid to this when it comes to other coins on other algorithms.

Which model to choose, the main nuances when buying a used one

During Ethereum mining, the value of the processor frequency does not exceed the maximum allowable, since during overclocking it is possible that the video card will issue invalid “balls”.

When mining ether, the changed parameters will not change anything, but if you take into account the work in the mode dual-mining, then these changes will positively affect the work in other algorithms that depend on the memory speed. 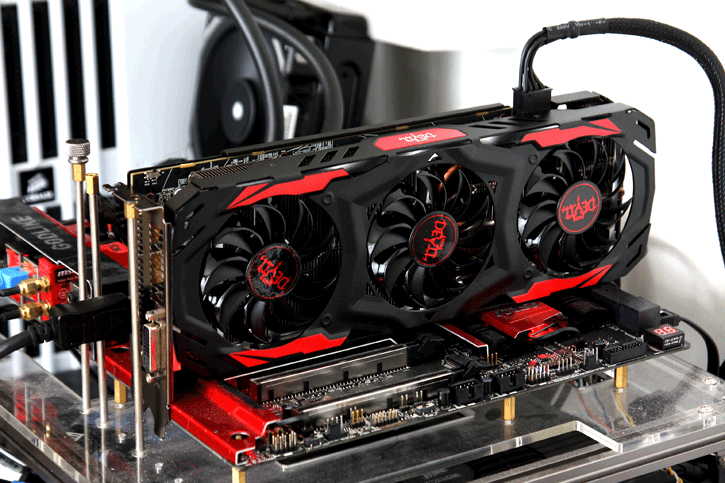 The younger model with 4 GB showed the following values:

The values ​​do not differ much, but much also depends on the manufacturer of the video card and the correct overclocking. For example, a video card MSI, is equipped with two fans and the device stays cold at all times. PowerColor equipped with 3 fans, nevertheless it is the hottest graphics card, despite the large number of coolers. Due to heating PowerColor is the worst suited for mining. Gigabyte in mining has shown itself from the best side and after the correct firmware.

If we take a video card from AMD, then it is better to choose the version with RAM from Samsung. The memory has good overclocking potential.

Of course, it is almost impossible to determine the supplier of memory chips on a new video card in a store. You can only roughly navigate the brand of the manufacturer. When buying on the secondary market, everything is much easier. Run the program you want, for example GPU-Z and all technical information about this graphics adapter will be displayed on the display.

The RX 470 and RX 480 are virtually in the same price range and are nearly identical in performance. But if you compare for mining, then the first will cost more in terms of price, and the second in terms of performance. In any case, it is even more difficult to find 470 on the market than 480, so it is more expedient to pay attention to the second option. Graphics Cards Series RX 4xx are no longer produced in factories in China, replaced by newer models RX 5xx series. Mining tests show that the difference between old and new models is minimal, so the demand for secondary market very large. It is worth purchasing such video cards for mining with caution. Pay attention to external damage (safety of seals) and the warranty period according to the receipt.

What to mine on AMD RX 480, the choice of the algorithm

Ethash is considered to be the main algorithm for which a video card is suitable. But during the growth period, the profitability of algorithms changes rapidly. Specialists constantly monitor relevant and profitable coins.

If you plan to mine ETH, then it is best to purchase the “older” model with 8 GB, it is better suited for mining than the “younger” version. The program “Claymore Dual Miner“, All settings can be left as standard. With these parameters, the frequency of the video processor will be 1100 MHz, and the video memory will be 2100 MHz, which will provide:

An online mining calculator will help you calculate the profit that can be obtained by mining a coin. Mining and hash rate of 30.1 allows you to mine 0.0028 ETH coins per day. Given the current exchange rate, this is $ 0.2 / day. The market is now experiencing severe problems and many will shut down their farms. But experts believe and hope that this is a temporary period.

When the video card first went on sale, there was no point in mining anything other than Ethereum. But after the appearance NiceHash the assortment has grown, and on the algorithm CryptoNight you could make good money.

At the moment, ETH has again become the leader, and it is most profitable to mine two coins at once (ETH + ZILL). therefore the best algorithm for RX 480 this is Ethash.

The firmware is a change in the value of the timings, which determines the mining. To flash a video card, you need four programs:

Further it is necessary:

BIOS flashing entails a loss of warranty, be careful.

The SRBPolarisV3.5 application allows you not only to edit the timings, but also to lower the memory and core voltage. However, the latest versions Claymore’s Dual Miner 15 and PhoenixMiner_5.0e_Windows allow you to perform undervolting and change timings on the fly. Add the necessary parameters to the executable file and the program will do everything by itself. In this case, you will not lose your right to warranty service. To understand how to overclock an AMD video card, you need to learn how to manipulate the operating frequency of the RAM. For overclocking use programs MSI Afterburner or Wattol, which can be downloaded from the official sites.

For overclocking in the program Afterburner the values ​​are used:

For the most profitable overclocking when mining ETH, increase the Memory frequency parameter by +30 MHz. The optimal value if the video card has been correctly flashed is about 2050 MHz. For mining other algorithms, it will often be necessary to increase the frequency of the processor of the video card, but remember that with this increase, the power consumption increases significantly. 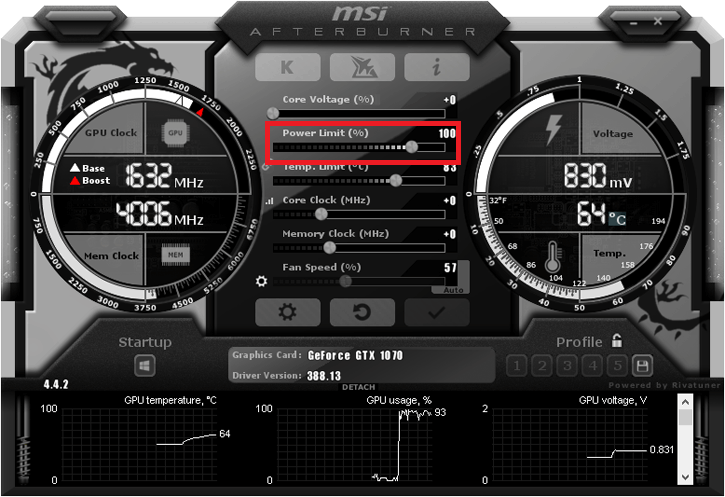 How to reduce energy consumption

Consumption of RX 480 in mining is very important when it comes to the optimal performance of the video card and stable income. Thanks to the program Afterburner you can reduce the voltage consumption of the processor.

The following clause is fulfilled:

Each video card has a margin to reduce power consumption. For mining, only the computational values ​​of one algorithm are used, so it is possible to reduce the load when mining any algorithm. With a decrease in the Power Limit parameter, the load will decrease by about 20%. Moreover, nand the temperature of the chip drops to 60 ° C. This will ensure the safety of the video card and increase its service life.

This method is effective when working on the original BIOS. However, if you modify the timings and lower the voltage, then the Power Limit must be raised, otherwise the core frequency will be unstable. Power consumption will not increase and the card will work without interruption. Overclocking parameters and power limit can be set in Afterburner, or in the WattMan settings of the AMD driver. And also register claymore or phoenix in the minenra batch file.

In 2020, this GPU model is rarely found on store shelves, but they are still relevant in mining. Especially with 8GB memory. But still, to complete the rig, it is better to buy new Rx 580 than used 480. It is also recommended to pay attention to the new line of AMD video cards. Happy mining!