A couple of months after the end of 2020, the summaries of the hardware year are slowly beginning to fall in. We are talking partly about financial reports that for component manufacturers in almost all cases show record years, but also about sales data that show the market status in more general terms.

The analysis company Jon Peddie Research has now summarized the final quarter of 2020 and eases the veil regarding the graphics card market. Compared to the third quarter of 2020, the PC market grew by as much as 30.25 percent – 35.76 percent on an annual basis. At the same time, the number of dedicated graphics cards sold fell by 3.9 percent on a quarterly basis. 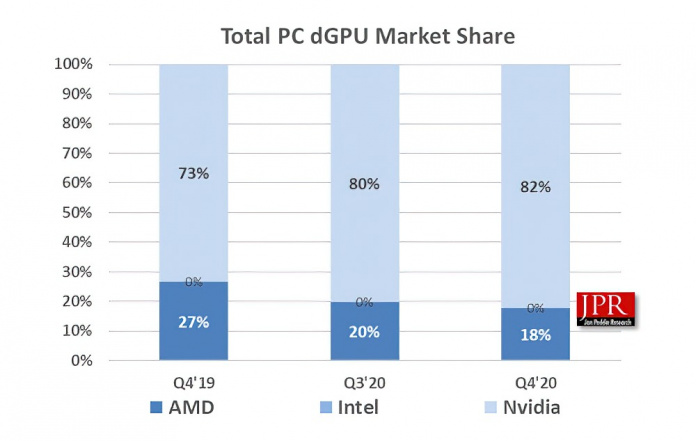 During the fourth quarter of 2020, Nvidia was the only one to sell fewer circuits, including laptops, than during the previous quarter. In total, the company fell 7.3 percent in terms of number of circuits sold, while Intel increased by as much as 33.2 percent and AMD by 6.4. Including laptops and integrated circuits, Intel dominates the market with a 69 percent share, with AMD in second place with 17 percent.

You Might Want To Read This:   AMD Radeon R9 Nano promises significantly higher performance per watt than Fury X

In terms of dedicated graphics cards, however, the situation is reversed – here Nvidia dominates with as much as 82 percent of the market. AMD backs down on both an annual and quarterly basis, while Intel is still shining with its absence in anticipation of the company’s upcoming Xe series cards. A variable to be reckoned with is that Nvidia launched its RTX 3000 series at the end of the third quarter of 2020, while AMD launched its new cards halfway into the final quarter of the year.

Anything is possible, but the power consumption of AIBs greatly diminishes the payoff for crypto-mining. Ethereum, the best-suited coin for GPUs, will fork into version 2.0 very soon, making GPUs obsolete. A person would be very foolish to invest in a high-end, power-consuming AIB for crypto-mining today. – Jon Peddie, ordförande Jon Peddie Research

Growth in the graphics card market is not expected to continue as avalanche, but is predicted by JPR to continue at 6 percent in 2021. Cryptocurrency mining is expected to be a driving force, but Peddie warns that Ethereum will switch to version 2.0 where the use of graphics cards for mining will be inefficient.