For a few days in May, rumors hailed about the next graphics launch from Nvidia, at the same time as the company’s CEO Jensen Huang diluted the speculation with “Ampere” -soosing pastries. Those who were hoping for a successor to the Geforce RTX 2000 series, however, went berserk, when Nvidia unveiled the newly baked architecture Ampere for data centers starting with the A100 solution.

In June, the graphics giant followed up the unveiling by making the A100 a regular graphics card for PCI Express format, instead of the server-specific models that communicate and are powered over the SXM4 interface. Despite a time on the market, performance testing of the fresh hardware has shone with its absence, but now the company Otoy is changing this with a run in the rendering test Ocatanebench.

It is the company’s CEO Jules Urbach who shares the result on Twitter. Behind the test runs the rendering engine Octanerender, which is an option for ray tracingrendering where not only the specific RT cores are used. In the run test, only CUDA cores are used, and the A100 places itself with a good margin as the master of the performance block with 446 points. 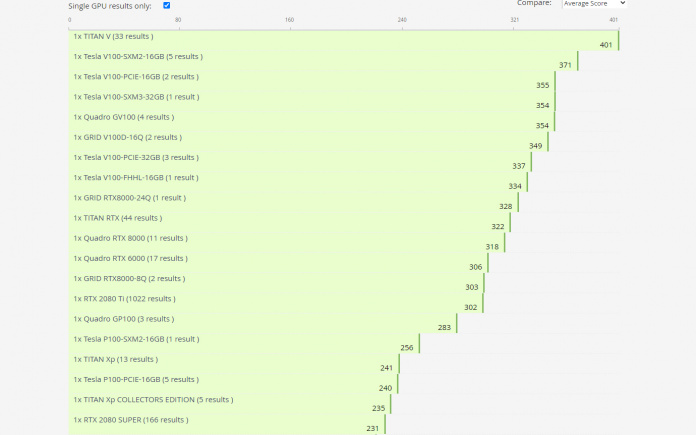 About 11 percent behind is the Volta-based Titan V, while the fastest Turing-based card in the test is the Grid RTX 8000, which falls almost 29 percent behind with 328 points. The more well-known model Titan RTX places itself just behind the Grid sibling with 322 points.

Although the future of Ampere for consumer cards is somewhat uncertain, both the cooling solution for the Geforce RTX 3080 and the family’s alleged specifications have found their way into rumors. The same applies to information on performance, where the latter card is said to beat RTX 2080 Ti by 20 percent, which can be translated into an improvement of a maximum of 50 percent compared to RTX 2080. Based on the A100 results, it is difficult to draw conclusions that confirm or overturn the data, which should still be taken with a pinch of salt.

Are you sitting on a Turing or Pascal graphics card today? What performance enhancement must Ampere show for you to consider an upgrade? Tell us in the comments thread!