On August 11, AMD’s latest Radeon RX 6000 graphics card will hit stores, namely the series’ simplest model RX 6600 XT. The product is based on the graphics circuit Navi 23 and according to AMD, the sight is set for those who want to play with a high frame rate and a resolution of 1,920 × 1,080 pixels. The company presents the target price of USD 379, which corresponds to around SEK 4,000 including VAT.

The Radeon RX 6600 XT will not be released in an AMD-signed reference version, which is why partner manufacturers have now lifted the lid on what awaits. These include Gigabyte, Asrock, Asus, Sapphire, MSI, Powercolor and XFX. The range offered varies from small graphics cards with a single fan, to large coolers with RGB lighting, where niche form factor or lavish cooling are likely to be factors that raise sales prices. At present, partner manufacturers are keeping quiet about exact price levels and possibly increased clock frequencies.

You Might Want To Read This:   Nvidia launches Titan V for SEK 31,500 - first out with Volta for PC users

Gigabyte is investing in the large coolers and unveils three variants in the Gaming OC, Gaming OC Pro and Eagle series. All have cover plates on the backs, three fans and four picture connections: dual HDMI and as many Displayports. The first two models have RGB lighting and judging by the names also slightly elevated clock frequencies. On the product pages, Gigabyte announces that these have not yet been determined, which suggests that they screw up the specifications even in the eleventh hour. 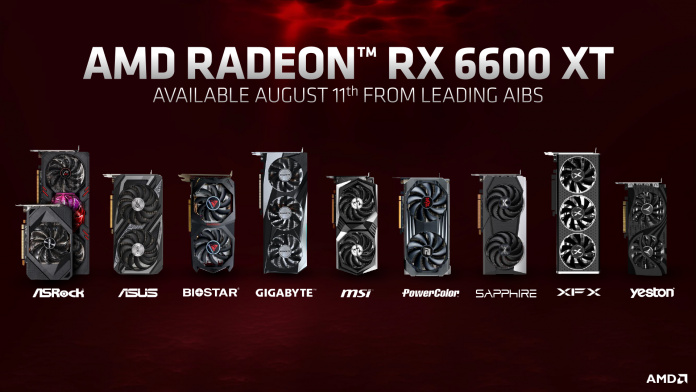 Asrock tries its luck with two different sized models in the Phantom Gaming series. One variant has three fans with lighting, which spills over to the side of the card. The smaller variant is a Mini ITX card with a single fan, which judging by the image material is about half as long as the three-fan sibling.

Asus expands the lavish ROG Strix series as well as the more stripped-down Dual family with Radeon RX 6600 XT additions. The graphics cards are both equipped with two fans, heat sinks with heat pipes and an exterior in gray and black. Cover plate in the same color scheme is visible on the backs of the cards, while four display connections of the Displayport and HDMI type are housed on the two-card-high IO panel. The pictures of the Asus vintage suggest that the graphics cards are slightly higher than two card slots, which is also reflected in more models from other manufacturers.

You Might Want To Read This:   AMD lowers the price of Radeon R9 290X Sapphire takes the Radeon RX 6600 XT to the Nitro + and Pulse series, where black-and-white and red-black covers and cover plates are on the menu. In both cases, the heat sinks hang out a bit behind the circuit board and the pictures show heat conduction pipes, dual fans and power supply via 8-pin PCI Express, which is also used in the other manufacturers’ models. Gaming X and Mech 2X are the product families that MSI is expanding with AMD’s fresh graphics cards, where the highlights for both are listed as dual fans, heat pipes and backs covered with brushed metal. Three Display Port and one HDMI connection are responsible for the picture connections. The company also shows tables of specifications, where omitted clock frequencies and uncertain information about power outlets prove that not all details are carved in stone. Infernal theme is, as usual, connected with Powercolor’s graphics card layouts and this is about Hellhound and Red Devil, where the latter steps up to power supply over 6 + 8 pins. Together with the three-card high cooling solution, it is suggested that this may be a heavily overclocked variant. RGB and dog pictures are instead characteristic of the sibling model, which shares the property of having two fans.

You Might Want To Read This:   The Geforce GTX 780 Ti connects externally via Thunderbolt 2 to the Macbook Pro

Finally, the XFX tones down the color with the Radeon RX 6600 XT in Merc308 attire, where three fans and pure black covers with perforations and discreet elements of text in white are enough as a description. The model fits into the chorus with unknown specifications, and more clarity about the partner models is to be expected by 11 August when they reach the market.