We already had a good air cooler from SPC in the form of the large Grandis 3 in the test, the latest member of the compact Fera series should now also perform well. Whether you should give in to the tempting low price, you can find out in the following article:

Packaging and scope of delivery

Curiously, I was sent both versions of the cooler, although they only differ in the additional fan in the dual fan version. I could have removed it myself for testing, but both options come in front of the lens. 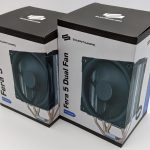 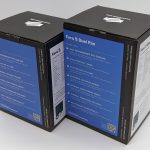 The box is kept simple and has an identical design to other coolers from the manufacturer. As always, the front is dominated by a large product image, the specifications can be read on the side and the most important features are listed on the back. The well-known standard. The box of the dual fan version is about a 120 mm fan larger, who would have thought that? The available space is being used effectively as you can see. The fans are packed in their own small boxes and the underside of the cooler is padded with foam. The accessories include the necessary small parts for installation, fan clips and a tube of the company’s own thermal paste.

The backplate of the mainboard is used for the AM4 socket, four plastic spacers are placed on the holes and the silver mounting frame is mounted with screws. Two spring-loaded screws directly on the cooler then fix it to the frame. The process can also be viewed again in video form:

Other manufacturers get by with less fiddling with small parts, but with a lying mainboard or fixed backplate, the whole thing is relatively easy to do. The contact area of ​​the cooler is quite small and does not cover the entire heat spreader with an AM4 CPU.
It will be shown later whether this has a negative effect on the temperatures.

And before messing around, too much thermal paste would be applied here:
Have a look at the video about thermal paste from our colleague Stephen @ GamersNexus!

As always, there is an overview of the technical details here, everything else can be read on the product page. You can also switch between the two variants there. * All prices incl. VAT plus shipping costs and possibly cash on delivery charges, unless otherwise described with the friendly support of Amazon
Dual