INNO3D continues to experiment with graphics accelerator designs, shapes and cooling systems, which is fully reflected in its one of the most productive top-end graphics cards, the GeForce RTX 3090 iCHILL X4.

The INNO3D GeForce RTX 3090 iCHILL X4 video card arrives on the table of its new lucky one in a huge colorful package with nice printing in blue colors.

You Might Want To Read This:   Nvidia does not stifle mining performance with Founders Edition

A short description of the novelty is presented on the back of the box. System requirements, specifications and a short list of equipment are also located here. 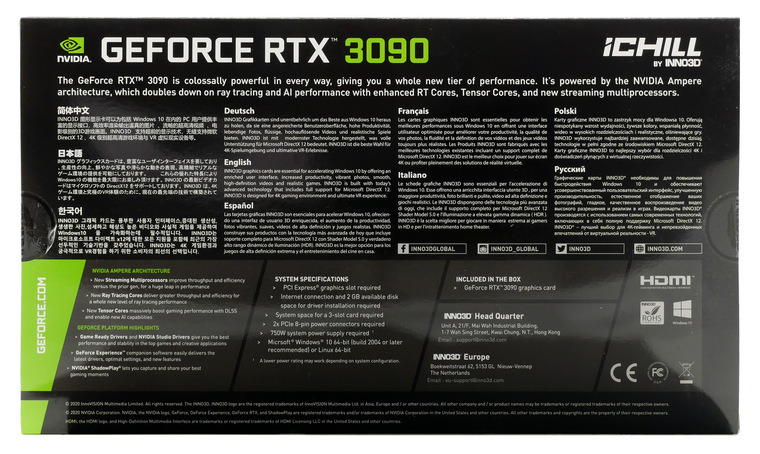 A special pocket inside the soft material contains:

The novelty in the face of INNO3D GeForce RTX 3090 iCHILL X4 with its design solutions and large dimensions, but the latter have become relevant for the new flagship solution from NVIDIA. The length of the model is 300 mm, other brands have more, but it covers three full-fledged expansion slots.

INNO3D GeForce RTX 3090 iCHILL X4 received a massive cooling system with three 87 mm fans and a characteristic extended part in the upper edge due to the location of an auxiliary cooling module with a 47 mm toddler, enlarged radiator fins and additional connectors.

The novelty is protected and strengthened by a thick support frame and a backplate that prevents the video card from bending inside the case.

INNO3D GeForce RTX 3090 iCHILL X4 is equipped with 24 video memory chips, twelve of which are located on the back of the PCB. In comparison with other manufacturers, INNO3D took care of additional finning in this place and, as a result, slightly better cooling of GDDR6X microcircuits, stability of operation and better overclocking potential.

Despite the high gluttony of the new flagship, the INNO3D GeForce RTX 3090 iCHILL X4 video card is equipped with only a pair of 8-Pin connectors for additional power supply, which, together with the PCI Express slot, provides the TDP model up to 375 W, and the real consumption is limited and amounts to peak 350-370 W.

To the right is an additional cooling module with a 47 mm fan, which blows the remote part of the radiator, partly the backplate and slightly touches the power connectors, which in theory will allow the wires to heat up less.

If you look even more to the right, then two 4-Pin 12V connectors open for connecting external equipment with backlighting, synchronization with a video card and control of standard software.

The INNO3D GeForce RTX 3090 iCHILL X4 backlight is implemented in a brighter and more beautiful version, without saving on space and space, transforming the appearance of the novelty and the entire computer into something else.

The glow of the novelty works in several modes and shimmers in numerous shades by default. 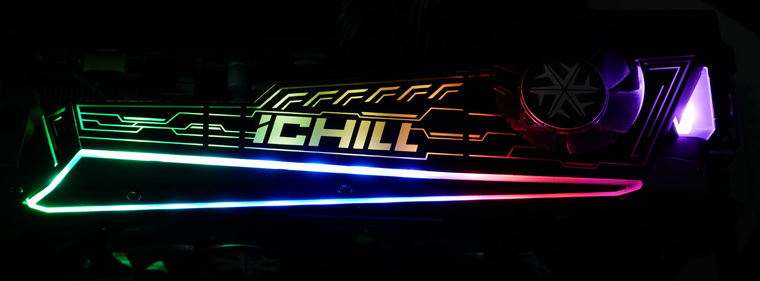 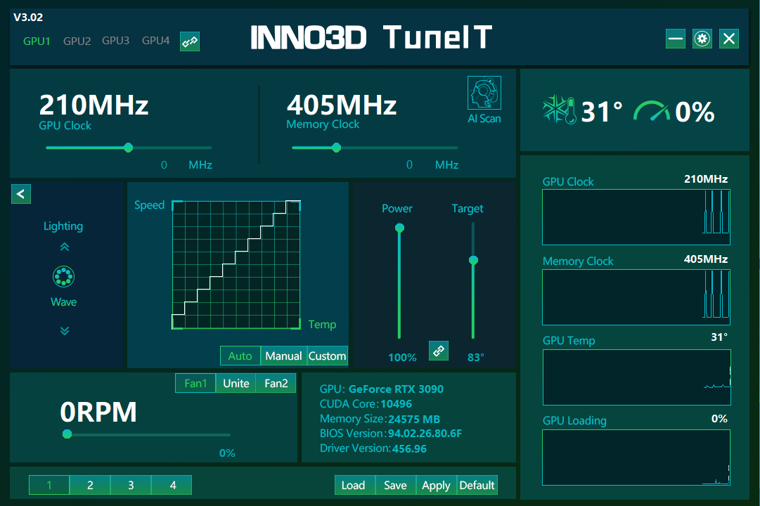 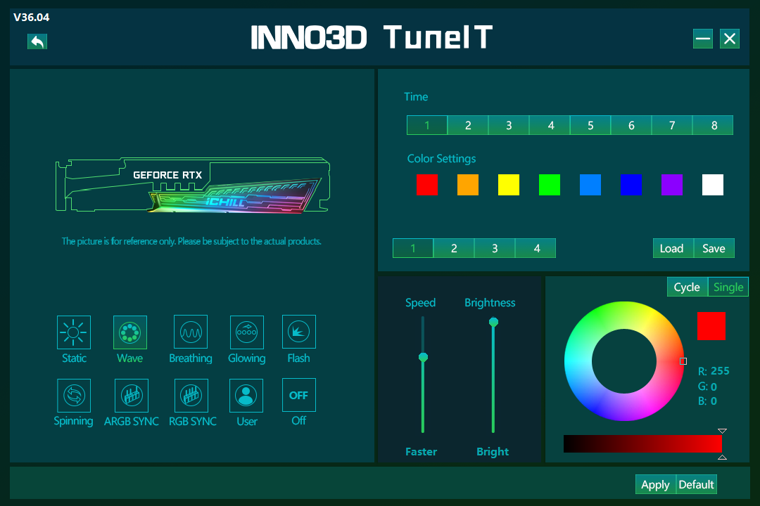 INNO3D approached the development of a cooling system for the hot and gluttonous graphics processor NVIDIA Ampere GA102 with all the responsibility and best practices of the past, so as not to be an outsider in front of its main opponents. And we can say they did it.

You Might Want To Read This:   "Turing is the biggest breakthrough in computer graphics since CUDA" 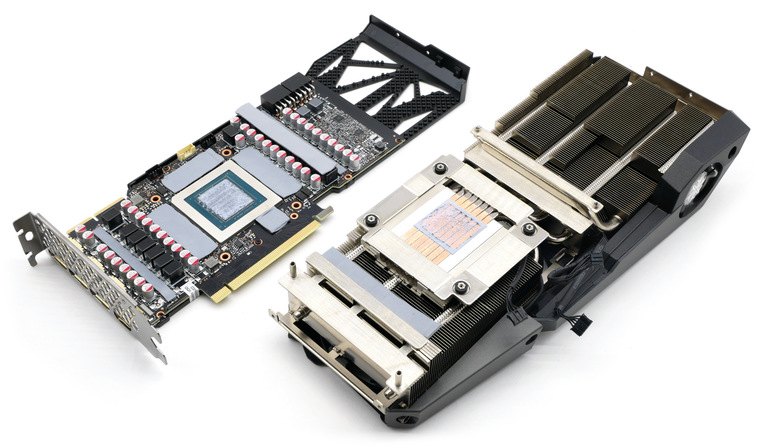 At the base there is a separate plate for removing heat from 12 front video memory chips.

The heatsink design uses direct contact technology with all seven 6mm heat pipes, crimped to a square shape to reduce area, but increase contacts by one huge GA102 die. The processing is done with a cutter, you can feel it slightly tactilely, the joints between the heat pipes are slightly worse, but they are easily filled with thermal paste.

The cooler is a thick two-section radiator, blown by three 87 mm fans with a rotation speed of 0 – 3500 rpm.

A very smart solution is to use the second section of the radiator to cool the power section of the INNO3D GeForce RTX 3090 iCHILL X4 not just with the help of elongated fins, but by placing an additional eighth heat pipe here!

You Might Want To Read This:   The AMD Radeon RX 6700 series can come with 12 GB of memory

Cooler module with a 47 mm fan and an implemented PCB for connecting external lighting.

The backplate received a unique ribbing in the protruding part, however, it is unlikely that the heat from the memory chips reaches this area, and the extra elements, on the contrary, will slightly worsen the acoustic picture when the air flow passes through them.

The base plate contacts both VRM zones and twelve video memory chips. 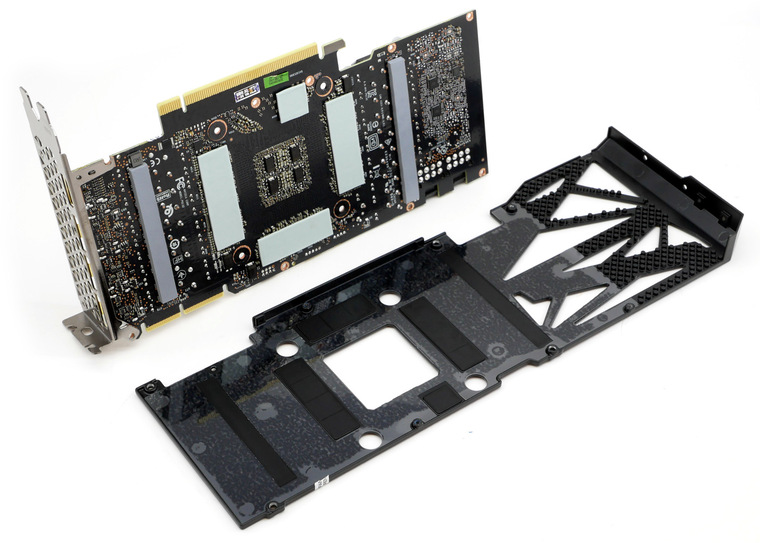 The INNO3D GeForce RTX 3090 iCHILL X4 uses an NVIDIA reference PCB in all its splendor, designed for partners. The manufacturer uses new thermal pads with increased heat transfer, which I noted on some other models. However, they are very adhesive and can be said to be disposable, so they cannot be dismantled without damage.

You Might Want To Read This:   AMD opposes Nvidia G-Sync with Freesync

Based on the data obtained and visual inspection, we can safely say that the power section has 18 mosfets according to the general formula “15 + 3” for GPU / Mem, NCP302150 power stages from ON Semiconductor with a rated current of 50A are used.

The video card is equipped with 24 GB of video memory of the GDDR6X standard. This volume is recruited by twenty-four microcircuits manufactured by Micron. Their clock frequency is 1219 MHz (effective frequency 19500 MHz).

You Might Want To Read This:   HP unveils several Geforce RTX 3000 Ti models

For overclocking video cards, as well as monitoring temperatures and fan speeds, we used the proprietary MSI Afterburner utility.

To check the temperature conditions of the video card in conditions close to everyday ones, we used the 3DMark Fire Strike Extreme stability test.

The noise level was measured using a TM-102 digital sound level meter. The measurements were taken from a distance of 30 cm. The background noise level in the room is no more than 28 dBA. All system fans were turned off. On the graphs, the conditional noiselessness limit for the system is determined at the level of 30.5 dBA, the conditional comfort limit is 37 dBA. The room temperature was 25 degrees Celsius.

Additionally, readings of the power consumption were taken using a Robiton PM-2 wattmeter and the temperature of the printed circuit board with a Fluke 59 Max IR thermometer.

INNO3D GeForce RTX 3090 iCHILL X4 can offer factory overclocking in a boost from 1700 MHz to 1755 MHz, which is a nice addition to your purchase.

You Might Want To Read This:   HIS launches Radeon HD 6970 IceQ and IceQ Turbo

Thanks to the massive cooling system, the novelty is very cold when idle, and the manufacturer has boldly equipped it with the “Fan Stop” technology. We get the following indicators:

Here are the detailed BIOS specifications for the INNO3D GeForce RTX 3090 iCHILL X4. The TDP level is 370 W without the possibility of increasing.

INNO3D GeForce RTX 3090 iCHILL X4 feels quite comfortable in modern games and projects, and it’s not even about performance, it’s off scale, but in temperature mode, boost and noise level.

You Might Want To Read This:   The Radeon R9 Fury X only has 4 GB of memory

The cooling potential of the INNO3D GeForce RTX 3090 iCHILL X4 is simply enormous! Do not forget that the video card consumes 370 W and about this amount is not so easy to divert / dissipate. 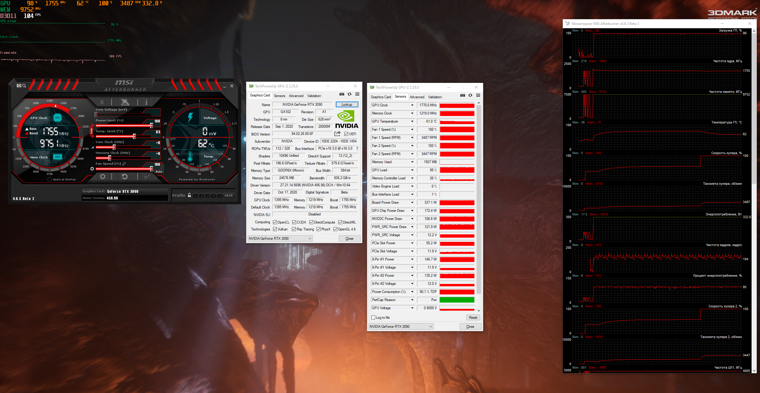 Realizing the full potential of the INNO3D GeForce RTX 3090 iCHILL X4 is hindered by its low TDP. In any case, overclocking the core up to 1830-1845 MHz in boost and memory from 19500 MHz to 21900 MHz allows the novelty to be overclocked.

You Might Want To Read This:   Nvidia confirms inadvertent distribution of crypto driver for RTX 3060

Performance in games and benchmarks

Attention! The power consumption of the entire stand from the outlet is taken into account using the Robiton PM-2 wattmeter.

First of all, the INNO3D GeForce RTX 3090 iCHILL X4 graphics card beckons with its design and colorful backlighting, which hides a massive cooling system aimed at containing the hot potential of the Ampere GA102. Further, the acquaintance continues in a more comfortable atmosphere: the novelty turns out to be balanced in settings and maintains optimal temperature indicators with a comfortable average noise level, giving out maximum performance. The backlight of the video card creates a wonderful lamp environment inside the PC with the ability to connect and combine a couple more devices.

You Might Want To Read This:   The Radeon R9 Fury X only has 4 GB of memory

There are no significant shortcomings in the INNO3D GeForce RTX 3090 iCHILL X4 video card: expanded requirements for dimensions and a power supply are presented for each model based on the GeForce RTX 3090, so this is something in between a minus and a feature. The only thing I would like to see is a version without direct contact at the base of the radiator, which will improve cooling by three degrees Celsius for sure.

Summing up, INNO3D GeForce RTX 3090 iCHILL X4 will be a good companion for an uncompromising gamer and connoisseur of a colorful system, where the novelty is fully realized and will always be loved.