GPU mining, an affordable method for purchasing cryptocurrencies. Nvidia video cards are in constant demand among miners. They are ahead of the competition in terms of energy efficiency and ease of setup, do not overheat so much and run quieter.

Contents hide
1 Graphics card specifications
2 Which is better to choose, GeForce GTX 1080 or RTX 2080
3 Mining test on different algorithms
3.1 What to mine, coin selection
4 How to Overclock RTX 2080 and Reduce Power Consumption
5 Conclusion, relevance of investment

Mining enthusiasts have been waiting for the release of the next rtx 2080 series, no less than gamers, pinning high hopes on the new device.

In August 2018, the release of the GeForce lineup began with the new generation Turing chip, designed to revolutionize computer graphics, thanks to Arthur Eppel’s ray tracing method. The technology, patented 50 years ago, was previously used only in the film industry and special computing centers. Photorealistic image quality is now available on a personal computer.

According to the creators of the 20 series video card, in 6 times ahead of predecessors… But the payback of the rtx 2080 video card in mining directly depends on its price and the volatility of the cryptocurrency market. Real-world hash rates for Nvidia’s new RTX lineup are pretty modest. The cards work quite fast, but they are also much more expensive than their predecessors.

Prices for new items from Nvidia in the store:

Data taken from the site https://www.e-katalog.ru. The product is not cheap. The reason for this is the serious cost of creating a new architecture and increasing the area of ​​the silicon chip. And also the installation of the latest version of video memory to expand the GPU bandwidth. But since their appearance on the shelves of Russian stores, the graphics accelerators of the new series have fallen in price by 20-25%, which made them more attractive for mining. The likely reason for this drop in prices is the preparation for the release of the next generation RTX 30 video adapters.

How promising is the 2080 ti video card for mining? The new GPU showed a 30% increase in the hash rate at the factory parameters, in the future, a two-fold increase in speed is possible. The final results are not yet available, since the current computer programs for mining crypto coins are not adapted to the Turing architecture. To fully unleash the potential, the creation of appropriate software is required.

Manufacturers release 5 rtx 2080 models, which one to choose for mining? First of all, you should pay attention to the cooling system. There are two coolers installed on the 20 line reference graphics accelerators. But if the card is purchased by mining, you need the coldest rtx 2080. The preferred option is with three large coolers, capable of efficient heat dissipation under high loads.

It is important to choose the right power supply. A farm for mining 2080 of six video cards requires a minimum of 2.2 kW of PSU power. For the calculation, the consumption of nodes (motherboard, processor, GPU, riser) and add 20% to protect against overloads.

Motherboard choose so that the number of PCI-E matches the number of video cards, you can use a switch to connect several risers in one slot, but this method does not guarantee correct operation. RAM at least 8 GB. At least 30 GB of virtual memory is allocated on the hard disk.

According to technical data, the performance of rtx 2080 mining farms is higher than that of previous assemblies.

The introduction of advanced technologies made it possible to reduce power consumption during overclocking, which is very important for the profitability of the computing process.

What to mine, coin selection

Is it possible today to earn anything from the extraction of virtual funds. How many mines per day 2080 during a long decline in cryptocurrency prices? In July 2020, the following coins were the most profitable for mining on farms, collected from rtx 2080 cards:

These figures are the sum of the earnings of one RTX 2080 graphics card in US dollars per 24 hours of operation, excluding electricity costs. On the RTX 2080 Ti, the profit will be higher, but the graphics adapter itself is more expensive. The RTX series video cards with the SUPER prefix have shown themselves quite well in crypto mining.

Of course, the figures for how many mines per day in RTX 2080 rubles are not impressive. However, it should be noted that over the year the amount of profit has practically not changed, and the GPUs themselves have become cheaper and more attractive for miners. Of course, it is difficult to predict in which direction the rate of these cryptocoins will unfold in a year, but in principle this is not required. Miners, unlike investors, may not think too much about the prospects of a particular blockchain project. The main thing is that the tokens have fairly good liquidity. If you doubt the prospects of altcoins Nimiq, Zel and others, which occupy the top lines of the rating in terms of profitability, simply exchange them for digital gold (BTC), Ethereum and other top coins.

Most users do not bother with setting up farms and install the application Nicehashwhere you just need to press a button Start the service itself chooses a profitable algorithm by paying out funds in BTC. Sometimes specialists who assembled a mining farm from rtx2080 cards extract the most unprofitable cryptocurrency at the moment. Then he sells it on the exchange at the time of growth and receives the digital, or fiat money he needs.

How to Overclock RTX 2080 and Reduce Power Consumption 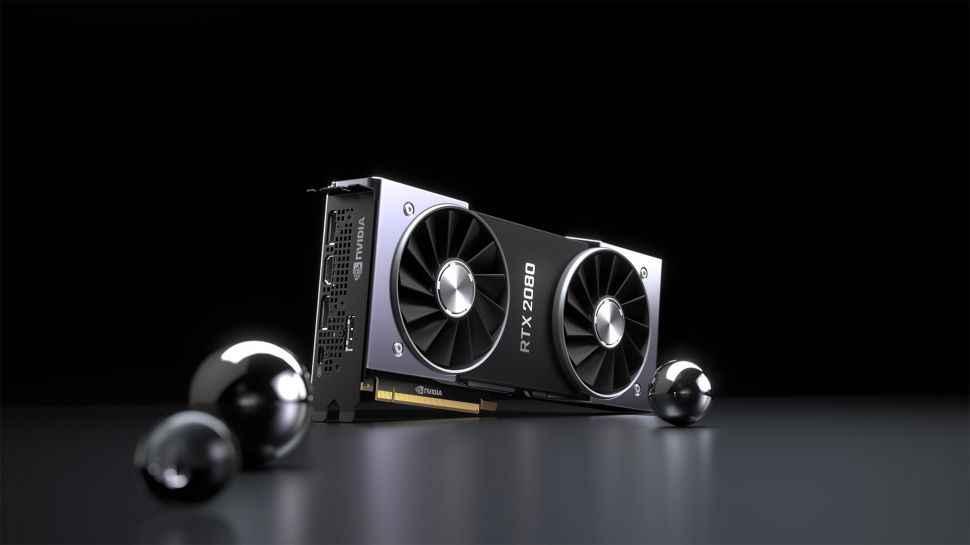 Graphics accelerators from NVidia are pre-overclocked on the factory assembly line. To achieve optimal performance in mining on the rtx 2080, it is used MSI Afterburner latest version. The program provides access to control the frequency of the core and memory of the video card, changing the limit of energy consumption, the speed of rotation of coolers.

After installation, the program’s shortcut in the form of an airplane will appear on the desktop. We open the dashboard, with many numbers and sliders. The core frequency is set on the scale Core Clock… To achieve the required indicator, you can move the slider manually using a computer mouse. But it is much more convenient to click on the numerical value above the scale and type the required frequency on the keyboard.

When adjusting during mining on the rtx2080, you should very smoothly change the numbers on the panel. Otherwise, the driver will freeze, leading to a black screen and restarting the PC. Below, under the core frequency scale, is the memory frequency (Memory Cock). The required value is set in the same way. You can also expand the parameters of the official overclocking rtx 2080, using the button “Settings“, It is located on the left under the cooler speed slider. 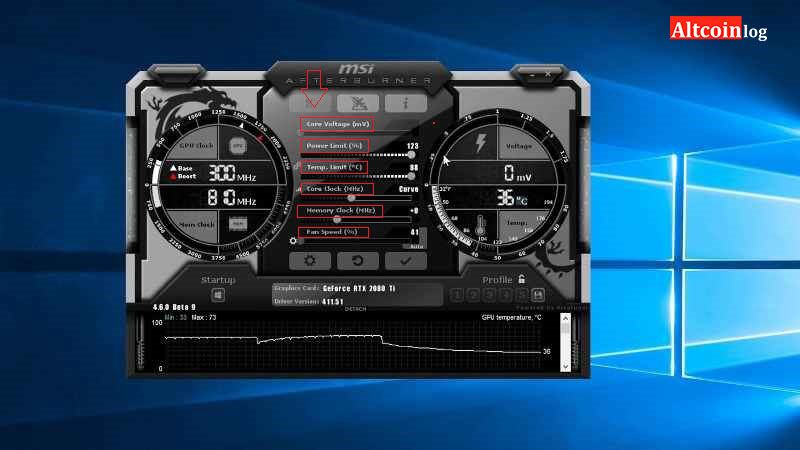 Above the core frequency scale, there is a control over the temperature threshold and GPU power (Temp Limit, Power Limit). Sliders move synchronously, with their help, they limit the energy consumption of the mining card 2080, in order to achieve maximum energy saving. Recommended indicators are in the region of 70-80%, these values ​​are selected individually for each card and mining algorithm.

The upper scale controls the voltage of the processor core (СоreVoltge). Underwolting (voltage drop), reduces the risk of video card overheating, saves power and increases overclocking potential. Too low voltage will result in loss of functionality of the device, therefore, this function should not be overused.

Summing up, we can say that collecting new mining farms from rtx 2080 video cards, however, like from other models, is now almost unprofitable. For a long time, mining has been going with a downtrend.

But the tough situation in the cryptocurrency market can change at any time. In the entire history of the existence of the brainchild of Satoshi Nakamoto and his followers, such a crisis is already the fifth in a row. Everyone knows how the previous ones ended. Bitcoin and the company were rapidly taking off to a new peak, despite all the pessimistic forecasts of ill-wishers. It is possible that the investment in mining on 2080 video cards will pay off much faster.

The blockchain industry is rapidly developingandeats. New promising projects appear, top crypto coins are developing new methods to speed up transaction processing and increase scalability. More and more new services are offered to traders on exchanges. Large trading platforms such as Binance launch their own mining pools. Even the panic caused by the epidemic COVID-19 failed to seriously and permanently bring down the virtual asset market.

In addition, graphics accelerators, unlike ASIC miners, are more liquid goods. If the desire to deal with cryptocurrency disappears, the cards of the new line can be profitably sold to fans of computer games.

On the other hand, it is wise to wait a bit with the purchase until the current situation is clarified. The main thing is not to miss the best moment.