As we can see, the NT-H2 seems to be denser than the old NT-H1, with 2.81 g / cm³ instead of 2.49 g / cm³, we cannot really judge the impact of the thing until we have tested. The color remains gray, but with a small nuance that we will see later. Noctua recommends storing its thermal paste for three years once started, we had no problems anyway with all the NT-H1 tubes we have seen passed!
An interesting information on the other hand, for those of you who change quite often, it’s not worth it! Even Noctua gives us five years of use before it changes, so you have the time. Afterwards, the change after 2 or 3 years is not a bad thing either, far from it. The operating temperature range is wider on the NT-H2, being effective up to 200 ° C, which is not desired for the survival of your components 😉 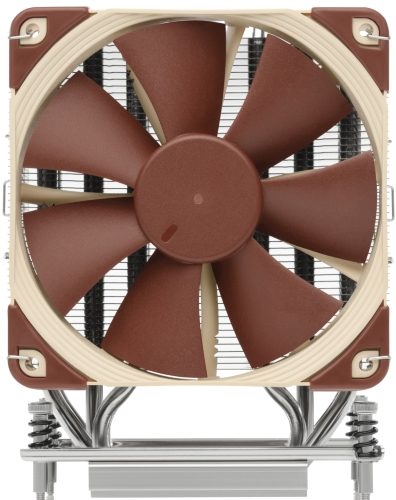 As for the Noctua NH-U12S TR4-SP3, it is quite simply identical to its NH-U12S brothers and its AM4 version (of which its interest is limited now, given that the manufacturer offers the mounting kit for free). On the other hand, this version is only compatible with the TR4 socket from AMD, the processor was much bigger and the contact surface had to be enlarged. Its weight of 856 grams places it in the average 12 cm cooler on the market and its dimensions allow it to be compatible with all memory kits (which may be important) on the market.
The fan is the now well-known NF-F12 PWM, peaking at a speed of 1500 RPM for a theoretical maximum sound level of 22.4 dB. The TDP of AMD TR4 processors being particularly important and the NH-U12S only remaining a 12 cm cooler, is relatively compact, it is recommended by Noctua to add a second fan to achieve higher boost frequencies . You don’t have to, but with the Threadripper 1950X (16 cores) / 2950X (16 cores) / 2970WX (24 cores) / 2990WX (32 cores) it is better wide than not enough. We’ll also see the impact of adding a second fan, as we tested it on a 1950X.