Different peeling techniques for games continue to be a hot potato. In practice, it is a matter of achieving a higher frame rate by rendering the game at a reduced number of pixels and then scaling up the result to the resolution of the monitor with as few quality losses as possible. On the PC side, Nvidia has been very prominent with its DLSS technology, which uses machine learning along with temporal information from surrounding frames to reconstruct the low-resolution image.

This summer, AMD countered with its technology Fidelity FX Super Resolution (FSR), which is a more classic and simple upscaling method combined with an adaptive sharpness filter. The advantages of FSR are that it does not require any Tensor cores to be used and therefore the technology works on a much wider range of graphics cards from both AMD and Nvidia. However, the simpler nature of the technology makes it difficult to achieve the same visual results as a reconstruction-based variant such as DLSS.

You Might Want To Read This:   Nvidia open for competitors to build CUDA-compatible hardware 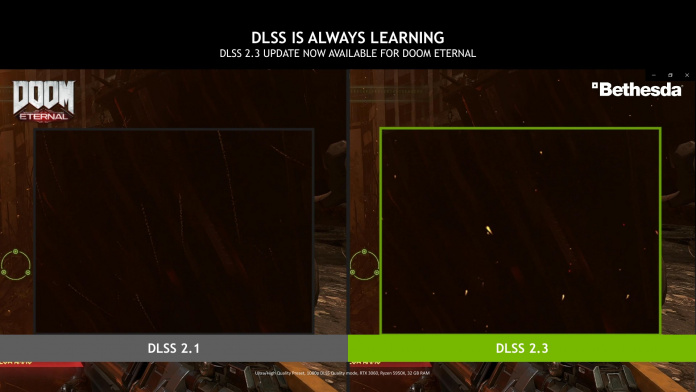 Now Nvidia is releasing a number of news on the upscaling front, where a new machine learning model for DLSS is next in line. While DLSS can often achieve good image quality results, the technology is sometimes drawn with drawbacks, including “ghost images” in motion and strange traces of particle effects. With DLSS 2.3, the latter artifacts will be significantly reduced according to Nvidia, where the improvements can already be seen today in updates to Cyberpunk 2077 and Doom Eternal.

With DLSS 2.3, Nvidia also adjusts the method to allow developers to implement new versions of DLSS in their games. As before, developers have the opportunity to include a new version of the program library for DLSS when they release an update to their games. In addition to this, they can now also choose to simply “green list” their game for updating to Nvidia, which means that the latest version of DLSS is automatically injected by the graphics driver. It is worth mentioning that this type of update only works for games that use DLSS 2.0 and up.

You Might Want To Read This:   Nvidia Geforce RTX 3080 Ti from Asus and Gigabyte - water to air In addition, the company is updating its simpler resolution scaler, which was previously only available via the driver’s control panel. This now moves into Geforce Experience and can be used via one overlay to adjust the rendering resolution of all games on the market. In the same menu, it is also possible to adjust the strength of the focus filter in real time. However, the whole thing does not happen completely without disadvantages, as the scaling itself also affects elements such as text and finishing effects. For the company’s standard resolution scalers to work optimally without blurred text and effects, it needs to be applied in the right place in the rendering chain during the development phase, and for that reason Nvidia is releasing its Image Scaling SDK. This is a direct competitor to AMD’s FSR, where game developers can implement a manufacturer diagnostic upscaling technology as an alternative to users who do not have an RTX-based graphics card and thus can not use DLSS.

You Might Want To Read This:   Intel Xe is suffering from efficiency issues

Like AMD’s FSR, Nvidia Image Scaling uses standard spatial scaling together with an adaptive sharpness filter. According to Nvidia, they have updated the scaling algorithm to be “best in class“, but what it means in practice in comparison with the competitor is difficult to know before actual tests have been performed. The technology is developed with open source code and will be made available via Github later in the day. 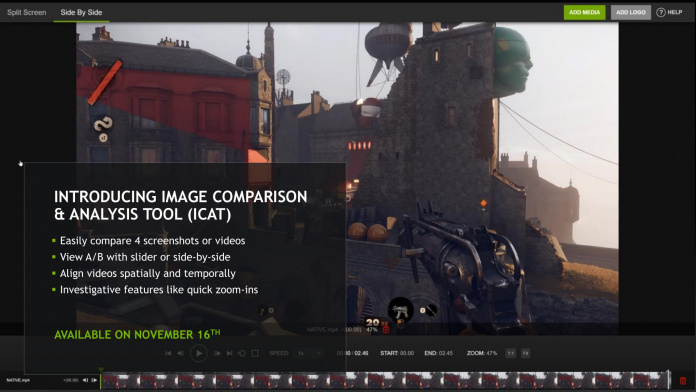 Last but not least, the company introduces the new Image Comparison & Analysis Tool (ICAT) to enable users to more easily compare image quality between different scaling techniques. In practice, this is a fairly simple video editing program, in which you can put the majority of recordings and compare these side by side in motion.

DLSS 2.3 and Nvidia Image Scaling via Geforce Experience are now available via the new Geforce Game Ready Driver 496.76 driver. Furthermore, the ICAT comparison tools are available for download via the company’s website.

You Might Want To Read This:   Samsung develops new mobile graphics architecture praised by analysts